It was a gloomy 2013 fall evening, tears streaming down my face with Say Something by A Great Big World and Christina Aguilera played through my headphones. That was the first time I read After on Wattpad. I was so in love with the novel. I had been reading every night till all hours of the night.

Flash forward a few years later, I bought the published version of After when I heard that the series was published. It sat on my bookshelf collecting dust for a few more years. It wasn’t till the news of a film being released that I decided maybe I should re-read the series that I loved so much as a young pre-teen.

I read the first half of After that summer and proceeded to order the rest of the series. I unfortunately put it back on my self again. This time the whole series collected dust. Every Time they caught my eye on my bookshelf I knew I had to read them again.

Now here we are, I am now a 21 year old with a lot more life experience re-reading the series. I watched the movie a few weeks back when it appeared on Amazon Prime Video rather than watched it in theatres and I am as obsessed as I ever have been.

Now this review may come with a lot of upset people and hatred. There is a lot of hate for the series as a whole labeled as abusive and women hating. I know it’s very popular to hate on After. It reminds me of the “Hate On Twilight” craze there was when those books were turned into movies. For some reason we have to hate on things that are popular. I, a free-thinking person understands that you can like a book while acknowledging problematic things about it.

This review will contain spoilers!! If you don’t want to spoil the book don’t continue. I will put spoiler tags if you’d like to skip through the review to see my final thoughts.

I thought I would start right off the bat with the highly criticised parts about After, aka the abusive behaviour, cheating and women basing that takes place in the book. Now, I never want to be insensitive to people that have been through things in their life but if we take After, only the first one, I would say that the book is not necessarily abusive. I also think the women-hating is an excuse to write off the whole novel. A lot of people reference how much the two main characters fight throughout the novel as mentally abusive. I find that it never crosses the line. The issue is more how dramatic the characters are which falls into inexperienced writing not abusive characters. Their banter is realistic and never so horrible I was shocked by what was being said. Yes, both characters quickly learn what causes the other to get upset but it makes sense for their characters. Hardin is a flawed bad boy and Tessa was raised in a very calculated manipulative household. If anything is abusive it would be how Tessa’s mother treats her.

I believe the most abusive actions that Hardin takes is the reveal of the bet. I think that was something that would otherwise be unforgivable. I’m very glad that they changed how the bet went down in the movie to make it more realistic and less disgusting. I find that was the one instance in the novel where I thought that was a complete misuse of trust and shocking. Also a few conversations the two have leading up to the bet reveal when you see Hardin starting to become riddled with guilt and deteriorating as a consequence can be seen as abusive. He begs Tessa not to leave him on multiple reprise. It tiptoes on the line of emotionally abusive and vulnerable. I truly believe that Hardin did fall in love with Tessa and his fear of losing her being expressed in promises of never leaving him were incredibly vulnerable. Tessa sticks up for herself a lot during those conversations telling him the most level headed and un-problematic response to his plea which is she won’t leave him if he doesn’t give her a reason.

This is followed by a lot of people calling the book cheating apologetic. Tessa does cheat on her boyfriend in the beginning in the novel. I believe that it was not necessary but it brought intrigue to Tessa’s character. There’s always that will she, will she not everytime she is with Hardin. Cheating is something that does happen. The book sets it up well that Noah was never a real boyfriend. He cared about Tessa for sure there is no doubt there but they were like glorified friends. This is not to say that Tessa did not go without consequence. There was no time in the novel where she cheated on Hardin without there being some kind of fallout. She does get judgement from her so called friends and her mother especially.

The last point which is women-hating or anti-feminist is the craziest thing i’ve ever heard. I understand that there is this trend whenever another woman is criticized it is anti-women. I strongly believe that is the most ridiculous rhetoric ever created. Women are not perfect. I think that Tessa not only hating Molly for being horrible to her but also thinking she is slutty is not a bad thing. I think it would have been problematic if she told Molly to her face that she was a whore or slut or whatever or even told her to stop. Tessa never tells Molly she isn’t allowed to do whatever she wants. Tessa has every right to believe whatever she wants about Molly. It’s would be a problem if she went out of her way to tell Molly to change or call her names to her face. It is also well established that Molly is in fact sexually liberated but uses that to hurt people. She sorta kinda deserves the criticism. I do agree that it could have been written a bit differently but not to the point that the novel needs to be “canceled”.

Overall, I think this novel is a really good coming of age novel. I love the ups and downs the main characters face. This book will have you laughing, crying and turned on all in a course of 400 pages. I read this book in less than a week. A week where I was incredibly busy and had a lot of school work. I just couldn’t put this book down. I am happily on to After We Collided in anticipated for the movie that will come out in early 2020.

If you are looking for a book that has all the feels and you can’t put down this is the book for you. If you are a free-thinker I also suggest giving this a book a try without the thought that it is problematic running through your head. Just enjoy it to enjoy it.

I went book thrifting! That actually wasn’t the plan but it’s just what happened. I was originally going to do a thrift haul for you guys but it didn’t work out. There’s not many thrift stores where I’m from and they don’t usually get a lot of nice things. Or well things that I would want.

They did have books though! I’m a bit of a book snob if I’m being honest. I love to buy new books because I hate when books are used. I just don’t like when pages are ripped or creased or stained. The irony is that I love to write in books. 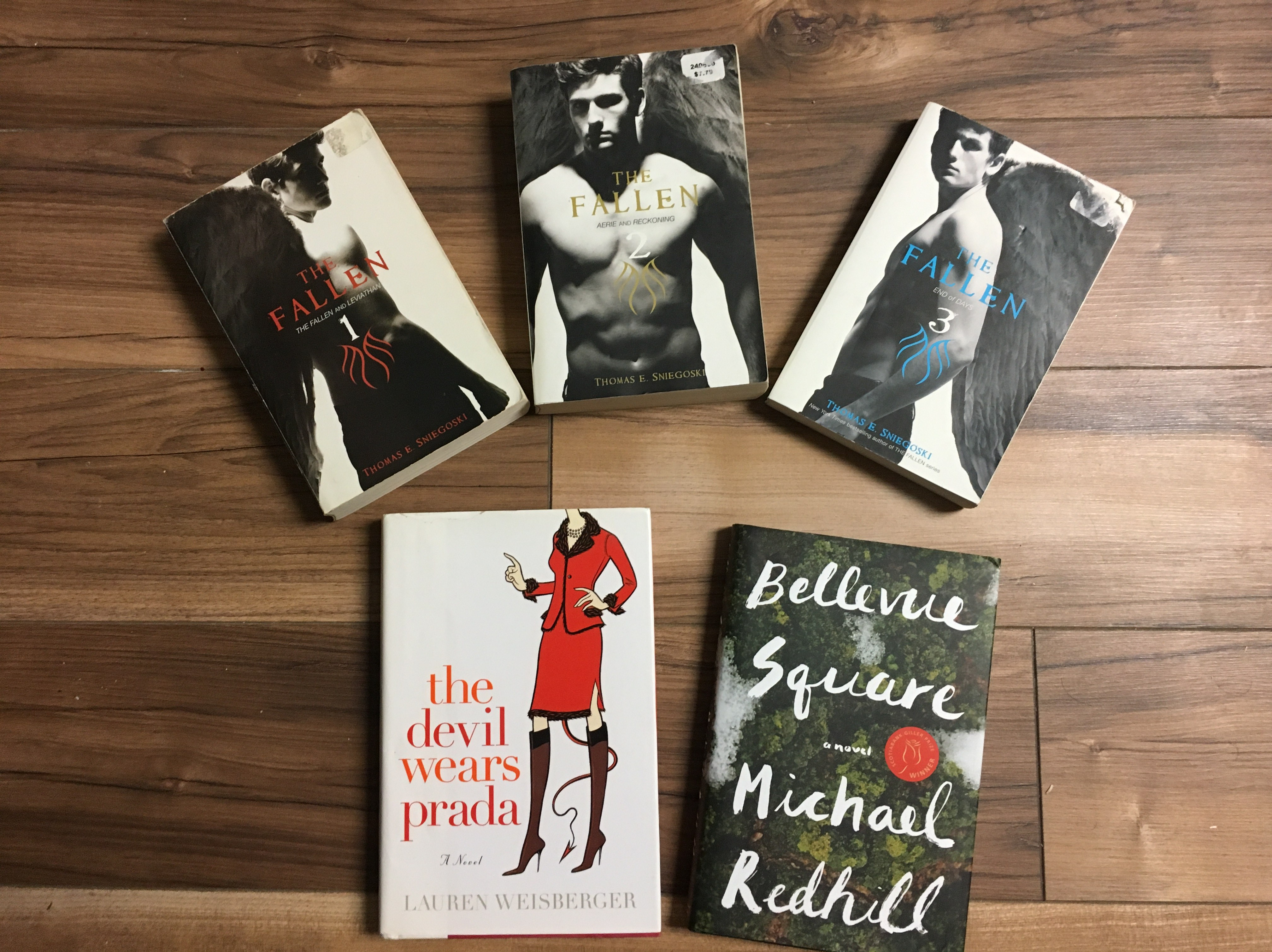 I quickly went through the book section not really thinking about it. Then I saw the book. I mentioned this books in my Summer Reading List. I found The Devil Wears Prada by Lauren Weisberger. The Devil Wears Prada is actually one of my favourite movies of all time. I’ve been wanting to read the book since I, well, found out it was a book. Working for Vogue is a dream of mine since I was about 15 years old.

After I found that book I decided it was time to see if they had any other books I’ve been wanting to pick up but have been having a hard time finding. The books were also like a 1$! If that means I don’t have to pay full price for a book I love it. 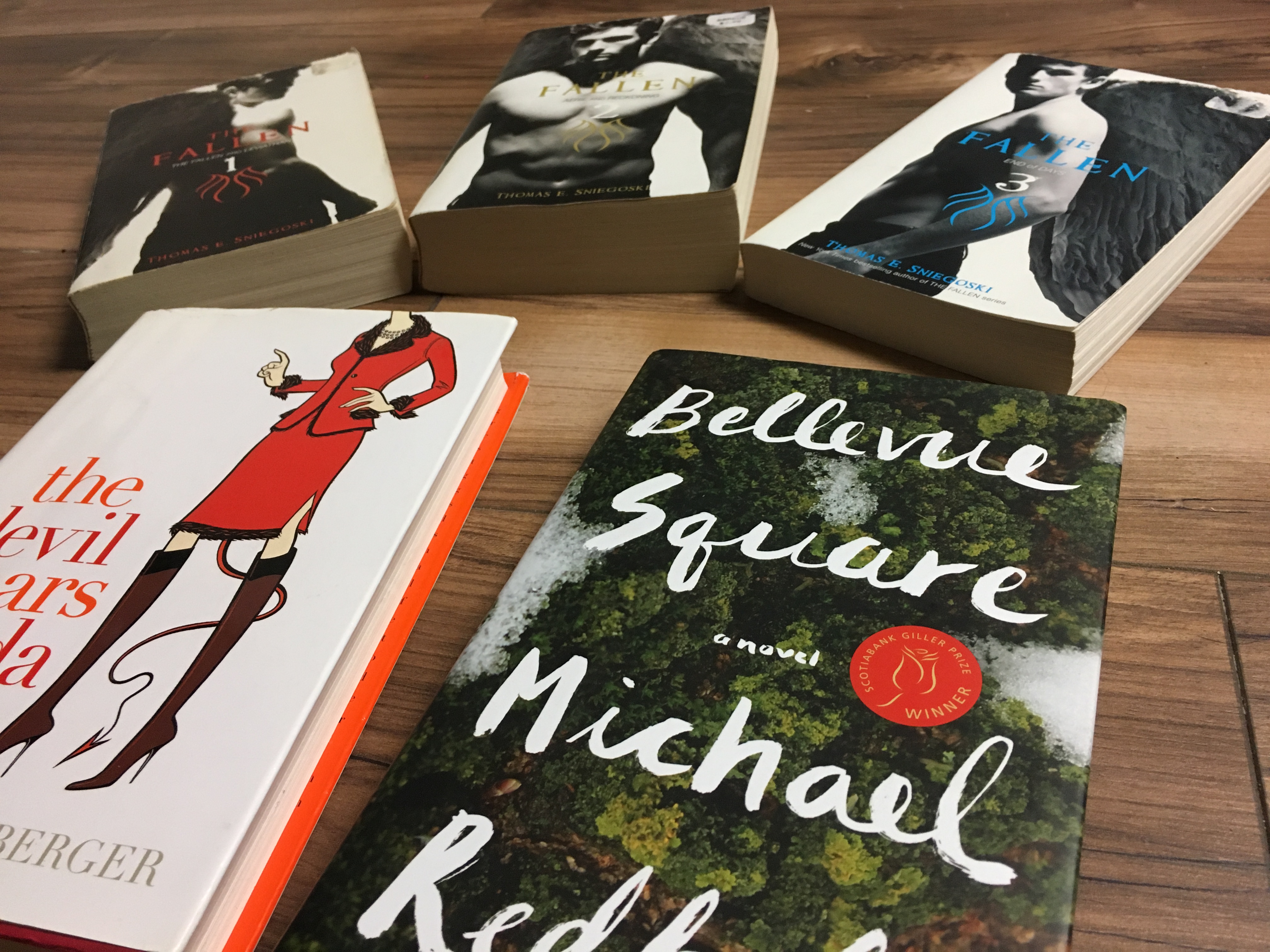 I’m super impressed with what I picked up and I plan on going back soon. My mind has completely changed on used books. Maybe because it’s so cheap. All these books are about 20$ Canadian each and I paid 5$. If I can save money I love it.

Have any of you guys ever picked up any used books? If so how was your experience? Were you happy with what you got?

My name is Clara, I’m an 20-year-old lifeaholic. I spread the message of love and happiness on everything I touch.